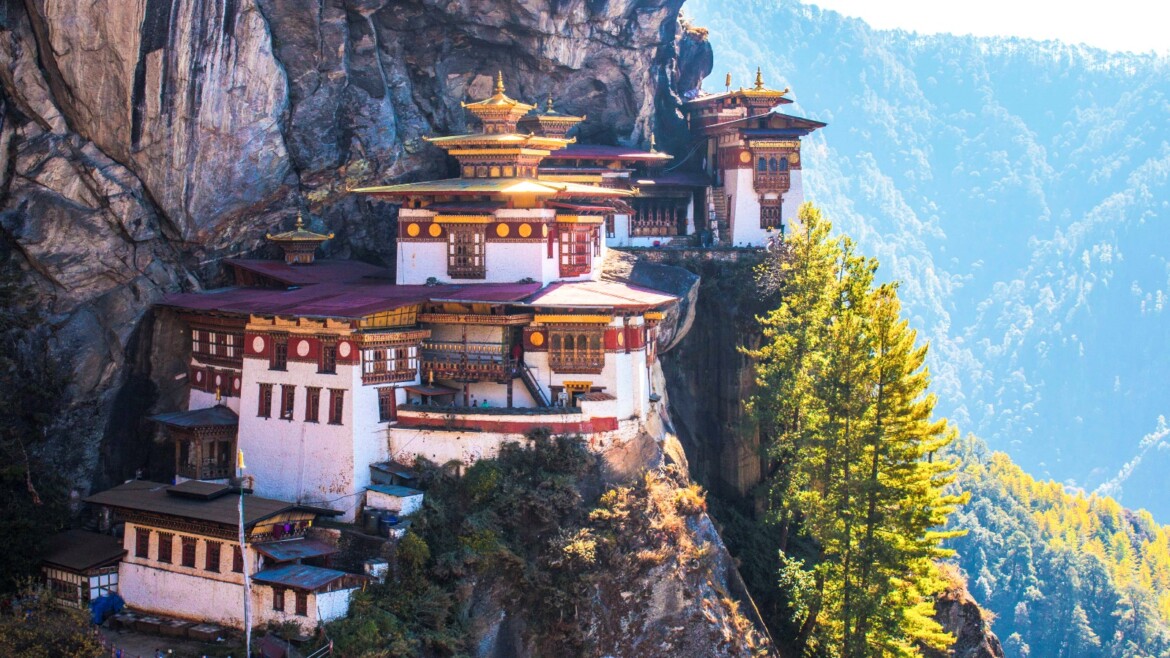 After breakfast we will apply for the route permit and depart for Thimphu, the Capital of Bhutan.
On the way we will visit the famous Kharbandi Gonpa, from where we will have the scenic view of the plains of India. We will pass numerous small town of Gedu, Chukha and Chunzom, the confluence of Pa Chu and Thin Chu. Continue the drive to reach the capital. Upon arrival check in at the hotel.

In the evening, visit the Tashichho Dzong; the main secretarial building which houses the throne room of His Majesty the King of Bhutan and also the head seat of Chief Abbot of Bhutan. It is the summer resident of the monk body, the winter being in Punakha Dzong. Located at the banks of the Wangchhu River the massive fortress was built in 1641 by Zhabdrung Ngawang Namgyal and rebuilt in its present form in 1965 by the Third King of Bhutan Jigme Dorji Wangchuck.

We will spend the rest of our time browsing through the Handicrafts Lane of Thimphu where there are more than 50 Government appointed shops selling the traditional Bhutanese crafts that you can buy as souvenirs. Rest of the time at leisure. Overnight at the hotel.

Today after breakfast we will begin our day with the visit to the famous landmark of the capital, the Memorial Chorten, consecrated in the memory of the Third kind of Bhutan who is regarded as the father of the modern Bhutan. Just as you enter the Chorten, you will be amazed to witness the local people, young and the old alike, circumambulate the Chorten with the prayer beads or the prayer wheel in hand, murmuring the sacred words of prayers. The tall four storied Chorten contains statues and iconography of deities from the tantric teachings.

It is time to witness the National Animal of Bhutan, Takin, at the Takin Reserve. Takin are related to sheep and weigh up 650 kgs. According to the local folktale, the Devine Madman, Drukpa Kunley, created the Takin by joining the goat’s head in the body of the Cow. This interesting animal is an endangered species found only in few pockets of the Himalayas.

National Library. Originally established in 1967 and housed inside the Tashicho Dzong, it was moved to the present site in 1984. It houses the important historical documents and photographs. The World’s biggest published book that weighs 68 kilograms and about 02 meters in height is also housed here.

After this interesting visit, we will now visit the rich Art and Crafts Centre of Bhutan at the Institute of Zorig Chusum. This institute provides opportunities for vocational training on the Bhutanese Arts and Crafts. We can witness the students training and gives an idea to the visitors on the traditional form of the Arts and crafts.

Visit Folk Heritage Museum, one of the oldest house in Thimphu was converted in the Folk Heritage Museum in 2001 to give an insight into the traditional lifestyle of the Bhutanese forefathers. It is like entering a traditional Bhutanese home in, say, 150 years back.
Next, we will visit Buddha Dordenma, which is one of the largest Buddha statues in the World at 169 feet. The body of the Buddha is filled with 1,25,000 smaller statues of Buddha. The view of the Thimphu valley is spectacular from this point. Overnight at hotel.

After breakfast, you will drive towards the Dochu La, a 16 km, 40 minutes’ drive through the winding road, admits the forest of Pines and Juniper and the lovely view of the Simtokha Dzong as we ascend slowly towards Dochu La Pass.

In 2003, Bhutan chased the Indian rebels, hiding in Bhutan in the eastern border, out of the country with a minimal loss to the Bhutan army. Some wanted to erect a monument for the victory, but the King replied that war should never be glorified. So instead he commissioned this monument honouring the dead soldiers and the dead rebels from the conflict. The 108 stupas is a memorial built then.

The Dochu La is at an altitude of about 3100m (10,171 ft.) and is the place where this memorial is built. Set admits the fluttering prayer flags, it is a visitor’s delight to spend some time here.

The 108 beautiful Chortens is built by Her Majesty Ashi Dorji Wangmo Wangchuck. From this pass, on a clear day, you can have a superb view of the highest peaks, the sharp peak being Masagang (7200m) dominating the region, others are Tsendagang (6960m), Terigang (7060m), Jejegangphugang (7158m) and Kangphugang (7170m).

Take a stroll here in between these 108 chortens, breathing in the fresh air, admiring the mountain ranges and getting lost in nature. After this wonderful visit you will resume the downhill drive towards Punakha.

After your lunch, it is time to take a beautiful hike on the paddy fields towards Chimi Lhakhang (fertility temple), the temple of the Devine Mad Man called Drukpa Kuenley. You can take a picturised and leisurely walk through the paddy field, no steep climb here, just easy walk in the paddy field. The return journey takes about an hour and a half or two.

Further drive to Punakha, you will visit Punakha Dzong, the most beautiful Dzong in Bhutan built in 1637 by Shabdrung, the spiritual and temporal ruler of Bhutan prior to the present dynasty. It is an old capital, which still serves as the winter residence of the monk body. The first King, Ugyen Wangchuck, was crowned here in 1907. It is now the winter residence of the Central Monastic Community and administrative headquarters of Punakha district.
Next you will see one of the longest suspension bridge in Bhutan, spanning 350m and perched high above the very swift river of Po Chhu. Draped with prayer flags, the bridge connects the town of Punakha and the Punakha Dzong, mainly used by locals from the other side of the town as a shortcut to Punakha Dzong. Overnight stay at the hotel.

After breakfast depart for Gangtey. Gangtey is a beautiful place of rolling hills and green meadows surrounded by snowcapped mountains. It is at an altitude of 3000m. From Gangtey, one can closely view the picturesque Black Mountain ranges as well as the beautiful Phobjikha Valley.

Gangtey Gonpa is perched atop a small hill that rises from the valley floor. The Monastery is surrounded by a large village inhabited mainly by the families of the 140 Gomchens (Lay Monks). The Gangtey Gonpa is the only Nyingmapa Monastery on the western side of the Black mountains and is also the biggest of its kind.

Today we will retrace towards Dochula Pass and Simtokha, continue the descend along the Wang Chu (Thimphu River) to meet Pa Chu (Paro River) at Chunzom, the confluence point of Pa Chu and Wang Chu. It will be interesting for the guest to take the walk on the bridge of the confluence point. Notably are the 03 Chortens at the confluence point, of different style, 01 pertaining to Tibetan Style, the other of the Nepali Style and the last one of the Bhutanese style. After the photographic season, you will continue your journey towards Paro along the Pa Chu.

A few kilometers from Chunzum is the Thamchok Lhakhang, a private temple owned by the descendent of the famous Tibetan bridge builder, Thangthong Gyelpo, also known as the “Iron Chain Bridge Builder”.  Still you can see the iron chain bridge which is built by him. It is a photographer’s delight. Upon arrival in Paro check in at the hotel.

After lunch we will visit the Ta Dzong, the National Museum and the Rinpung Dzong (Paro Dzong). The Museum boasts of its collection of fine arts, paintings and bronzes. There are also textiles, jeweler, and handicrafts sections as well as galleries of stuffed animals and butterflies from Bhutan. The stamps’ hall is very popular and displays, among others, 3-D stamps, record stamps, silken stamps, embossed stamps and the famous triangular stamp depicting the yeti.

Located below the Museum is Paro Dzong. Also called the Rinpung Dzong, the Fortress of the Heap of Jewels, Paro Dzong was built in 1645 by the Zhabdrung Ngawang Namgyel. It is an imposing square fortress with a central tower and courtyards housing the administrative quarters and the monastic section.

After the visit, you will take the leisurely downhill walk to cross the typical Bhutanese Cantilever Bridge, one of the finest specimens in Bhutan with its shingle roof and two guard-houses at each end. At the other end of the bridge will be your car and further drive to the Hotel. Overnight stay at the hotel.
the hotel.

Hike to Taktsang Monastery – Make an early start to Taktsang Monastery, clinging on the steep rock, is one of the holiest temples in Bhutan. It is believed that Guru Rinpoche flew on the Tigress back and meditated here. The trek to the temple through the pine tree and sweet aroma of the air is indeed a very special and memorable event. The return hike will take about 05-06 hours. The hike is usually till the cafeteria from where we will have a breath-taking view of the Monastery and a photographer’s delight. After the visit, it is an easy descend of 03 hours. After the hike, we will return back to our hotel.

For the first 03 hours, it’s uphill on the well-marked trail to reach the cafeteria (lunch point) from where you will get the best view of the Tiger’s Nest. Further 02 hours hike will get you to the Monastery.

Excursion to Chele La – After breakfast we will take the excursion drive to Chele-la pass. It is at an elevation of 3988m (13,083ft.), considered to be one of the highest motor-able passes in Bhutan. After driving through the Plue pine & Rhododendron forest for 45km you reach Chele-La Pass (3988m). From this point, one can have superb views of Mount Jhomolhari & Jichu Drakey. This is a very good place to walk around for a few minutes enjoying the view. Drive back to Paro, the rest of the afternoon is at your own leisure. Overnight stay at the hotel.

After breakfast retrace back to Phuentsholing. Upon arrival check in at the hotel. Rest of the time at leisure.
Overnight at the hotel.

In the morning, you’ll be driven to the airport where you’ll board the flight to your onward destination.