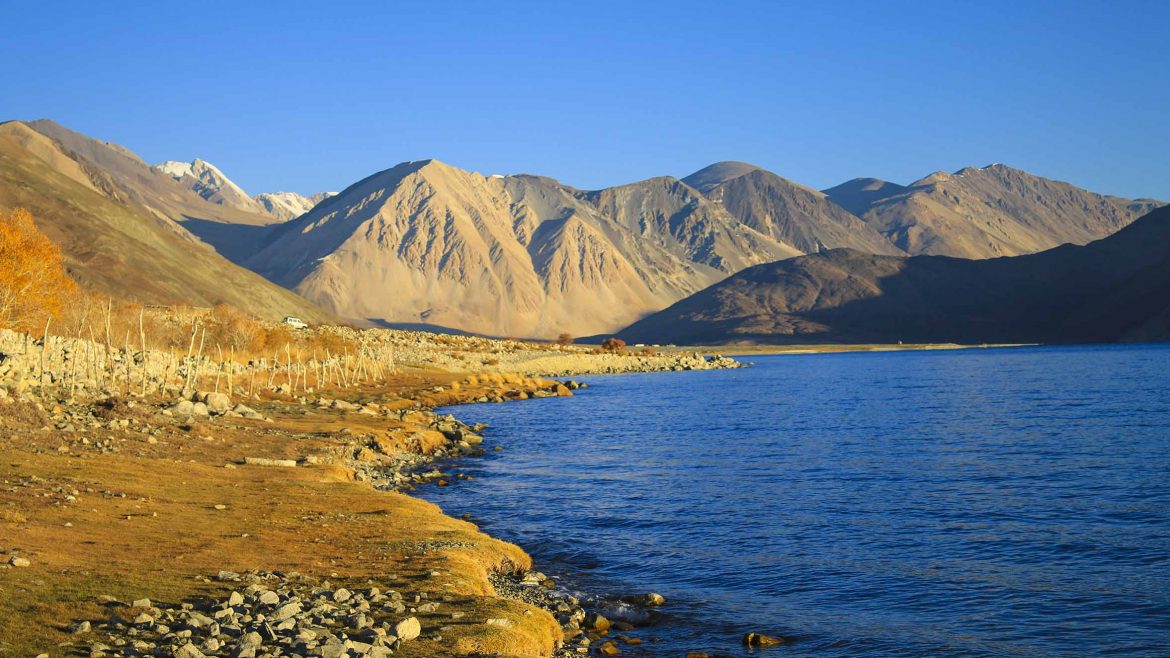 Day One: The Lost World

Day Two: When in Ladakh

Explore the gorgeous town of Leh and its beautiful stopovers. Most prominent among them is the Leh Palace. The ruins of this 350-year-old, nine-story high Palace offer a breath-taking view of the city of Leh and its surroundings. Leh Market is starkly different from its metropolitan counterparts. The shops here are small, colourful, and vibrant. It has a rare mix of western and native cultures which is unique to itself.

Leh also boasts of a widely diverse population and shows its influences on its infrastructure. The Shanti Stupa, Jama Masjid, Namgyal Tsemo Gompa (Sunset Point), Zorawar Fort, Gurudwara Shri Pathar Sahib, and Magnetic Hill all lie within 25 km of Leh’s radius. Also, within this radius is the Indian Army’s Hall of Fame with Sound & Light Show. It is a monument dedicated to the soldiers who served, and/or perished on the borders during wartime.

The Sangam (Confluence of rivers) between the ice-cold Zanskar and the mighty Indus is incredible to watch. Its gushing blue waters put on a stunning display of power. Once you’ve absorbed in all these wonderful sights you will return to Leh and spend the night there.

After an early breakfast, you’ll checkout & head to Nubra Valley. The road to the Nubra Valley goes through the 11th highest motor-able road in the world, the mighty Khardung La Pass (17,582 ft.). This Pass is almost permanently covered in fog and snow. However, the bone-chilling cold there is more than compensated by the unparalleled view that it offers, of the Ladakh mountain range. Descending down from Khardung La you’ll arrive in Nubra Valley.

On arrival, you’ll first visit Diskit Monastery. It is over 250 years old and is the oldest monastery in Nubra Valley. Next to that lies an imposing 100 feet statue of Maitreya Buddha, in its resplendent golden avatar. From here drive to the sand dunes at Hunder. You can spot the world-famous double hump camels’ here. These mammals are extremely rare and are found in merely a handful of places all over the world.

You can also go on an ATV ride on the sand dunes or try go-karting (on direct payment basis). Later check-in at the camp & spend the evening looking up at the skies. The pollution-free air of Ladakh offers ample opportunity for stargazing.

Day Four: This is Paradise

After breakfast you’ll checkout and visit Sumur, a picturesque village around 42 km’s from Hunder on the other side of the valley. The village of Sumur is famous and also an important stop since the holy monastery, Samstem Ling Gompa is located close to the village. The Samstem Ling Gompa other than its spiritual importance is also known for its frescos and gorgeous silk Thangkas. The sand dunes at Sumur is also unoccupied compared to its counterpart in Hunder.

Later in the day take a short drive to Ladakh’s best-kept secret, Yarab Tso Lake. The lake is a sacred place for the local people and can only be approached by a short hike. Simply sit by the rocks, breathing in the unpolluted mountain air, relishing the sight of colourful prayer flags fluttering around the crystal-clear water, and experience the sense of calmness it brings.

Drive further on to the hot sulphur springs at the village of Panamik where you can also visit Ensa Gompa. Panamik is also the village that is nestled close to the Siachen Glacier, the highest battlefield in the world. Later head back to Sumur for the night.

After a lazy breakfast, you’ll check-out and drive straight to Leh. On the way back stop at Khardung La 17,582 ft. and get those perfect pictures for your Instagram and continue the drive to Leh. Upon arrival, you’ll check-in at the hotel and will have the rest of the evening to yourself.

After an early breakfast, you’ll check-out and drive towards Pangong Lake 13,943 ft. via the Chang-La 17,585 ft. Chang-La is the 10th highest motor-able pass in the world. On the way your first stop will be Shey Palace, the palace, mostly in ruins now was built first in 1655. The Palace and adjoining monastery are situated on a hilltop and the Palace offers a breath-taking view of the valley below as well as of the Mountain range across the valley, where the colours of the mountains change with the altitude.

Later visit Thiksey Monastery which is home to a beautifully sculpted sculpture of Maitreya (Future Buddha) as well as murals depicting the life of future Buddhas. Descending down Chang La you will stop at Tso Ltak, an unexplored lake at 16,102 ft. and continue on to Tso Pangong.

The first glimpse of the tranquil, azure blue waters and shaky lakeshore of Tso Pangong remains etched in the memory of tourists. The lake has the most crystal clear, cerulean blue waters ever seen. Tso Pangong plays host to migratory bird families during mating seasons. Bar-headed Geese and Brahmani Ducks are two of the most prominently found birds here. The rare, endangered, and usually elusive Black-necked Cranes are also found here.

Upon arrival you’ll check-in at the camp and spend the rest of the evening strolling around the lake, taking in the beautiful scenery.

Day Seven: Into the Wild

After an early breakfast drive towards Tso Moriri which is at an altitude of 14,835 ft. above sea level. This route goes via Maan – Merak – Chushul – Rezang La – Nyoma – Tso Kyagar to reach Tso Moriri. This will be one of the most scenic drives on your Ladakh Adventure as you drive parallel to Tso Pangong through the valley soaking in the true beauty of Pangong Lake and its changing hues.

On your way, you will stop at Rezang La War Memorial. It is the site of the last stand of the 13 Kumaon, during the Sino-Indian War in 1962. From here, your next stop is Kyagar Tso, one of those small, yet sublime lakes that are usually not on the tourist radar. Its emerald waters and reflections of the surrounding hillocks are certainly worth a few shots. It’s a non-stop drive to Tso Moriri after that.

Flanked by golden brown mountains on one side and lush green plains on the other, Tso Moriri is nothing short of surreal. It is one of those few places where you can spot the rare and endangered black-necked cranes. Needless to say, shutterbugs will have a gala time here. After you have basked in the beauty of this place, you’ll check into your camp/hotel for the night.

Day Eight: Living on the Edge

Tso Moriri, is frequented by birds, and also by Tibetan wolves, Tibetan foxes, and Tibetan Gazelles. You can even spot marmots – incredibly cute rodents, often found nibbling on something. They are quite approachable, so take as many selfies as you can with them, but don’t feed them. It can be fatal.

Today, you will go on an adventure, riding across Tanglang La pass (17,480 ft.), the 12th highest motor-able pass in the world. It’s considered one of the harder roads to drive on. But first, you will stop at Puga Hot Springs which has the potential to produce geothermal energy.

From here, drive to Tso Kar (14,862 ft.), a salinized lake. In fact, its shores are partially covered in salt crust. Approximately 5 km on the southwest end is a freshwater lake called Startsapuk Tso.

The lake is connected to Tso Kar by an inlet stream and is a treat for bird watchers. Both these lakes have been added to list of Ramsar sites which are the recognized sites of international importance under the treaty of Ramsar Convention. You will reach Leh by evening, with the night for you to explore more of Leh.

Leh: Day at own leisure (No Transport)

Take this day to explore the small lanes of Leh on foot, try bouldering, river rafting, paragliding or just go shopping at Leh Market. You can try some local Ladakhi food which has much in common with Tibetan food, the most prominent foods being Thukpa (noodle soup), and Tsampa, known in Ladakhi as Ngampe (roasted barley flour).

A dish that is strictly Ladakhi is Skyu, a heavy pasta dish with root vegetables. As in other parts of Central Asia, tea in Ladakh is traditionally made with strong green tea, butter, and salt. It is mixed in a large churn and known as Gurgur Cha, after the sounds it makes when mixed. Sweet Tea (cha ngarmo) is common now, made in the Indian style with milk and sugar. Most of the surplus barley that is produced is fermented into chang, an alcoholic beverage drunk especially on festive occasions.

In the morning, you’ll be driven to the airport where you’ll board the flight to your onward destination.

Top 10 places to visit in Ladakh