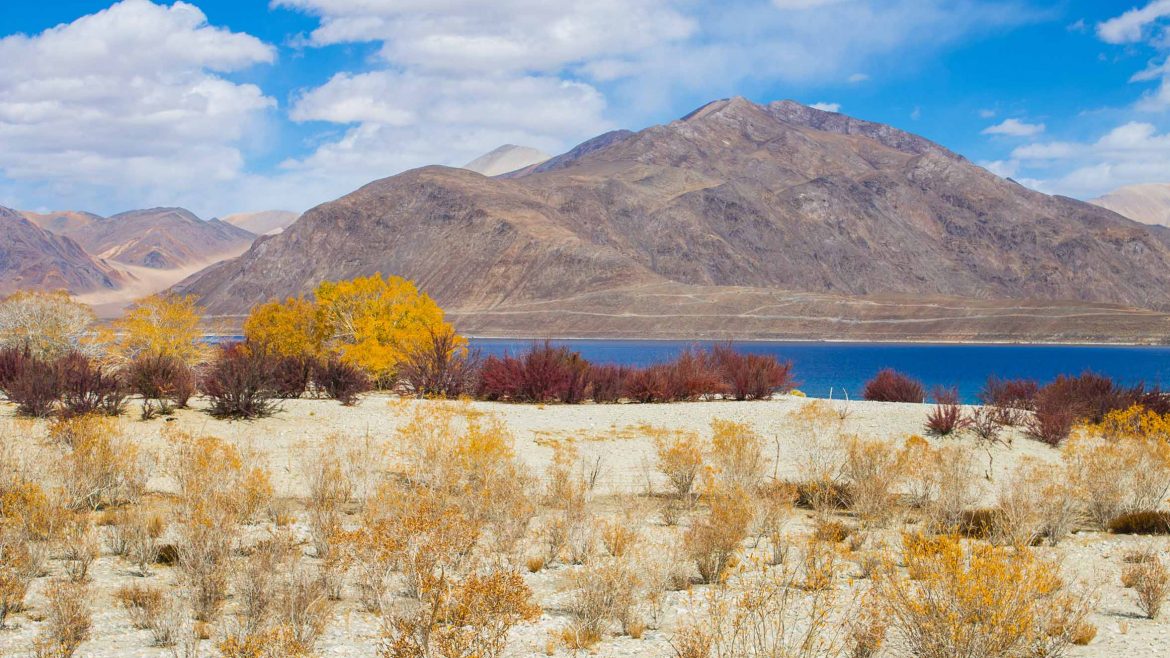 Day Two: What A View

Explore the gorgeous town of Leh and its beautiful stopovers. Most prominent among them is the Leh Palace. The ruins of this 350-year-old, nine-story high Palace offer a breath-taking view of the city of Leh and its surroundings. Leh Market is starkly different from its metropolitan counterparts. The shops here are small, colourful, and vibrant. It has a rare mix of western and native cultures which is unique to itself.

Leh also boasts of a widely diverse population and shows its influences on its infrastructure. The Shanti Stupa, Jama Masjid, Namgyal Tsemo Gompa (Sunset Point), Zorawar Fort, Gurudwara Shri Pathar Sahib, and Magnetic Hill all lie within 25 km of Leh’s radius. Also, within this radius is the Indian Army’s Hall of Fame with Sound & Light Show. It is a monument dedicated to the soldiers who served, and/or perished on the borders during wartime.

The Sangam (Confluence of rivers) between the ice-cold Zanskar and the mighty Indus is incredible to watch. Its gushing blue waters put on a stunning display of power. Once you’ve absorbed in all these wonderful sights you will return to Leh and spend the night there.

After an early breakfast, you’ll check out & drive to super scenic Nubra Valley 10,000 ft. The road takes you through the world’s 11th highest motor-able pass, Khardung La (17,582 ft.) a place engulfed in fog and wrapped by snow-laden peaks. You will literally be on cloud 9 that day.

Descending from the high pass, you will drive through the barren beauty of Nubra Valley, with the aquamarine waters of Shyok River for company. On arrival, you’ll first visit Diskit Monastery. It is over 250 years old and is the oldest monastery in Nubra Valley. Next to that lies an imposing 100 feet statue of Maitreya Buddha, in its resplendent golden avatar.

Later, you can spot double-humped camels, one of the rarest mammals, lounging on the sand desert at Hunder. You can also go on an ATV ride on the sand dunes or try go-karting (on direct payment basis).

At night, step out of your cosy room and gaze at the sky. Ladakh is one of the best places to stargaze, thanks to the pollution-free environment.

Day Four: Along the Shyok river

After an early breakfast, drive towards Tso Pangong via the Shyok River. This route goes via Agham – Shyok Village – Durbuk – Tangste to reach Pangong Tso. This is one of the most remote routes of Ladakh and it’s operational for only a few months a year.

The first glimpse of the tranquil, azure blue waters, and shaky lakeshore of Tso Pangong remains etched in the memory of tourists. Pangong Tso has the most crystal clear, cerulean blue waters ever seen. The Lake plays host to migratory bird families during mating seasons. Bar-headed Geese and Brahmani Ducks are two of the most prominently found birds here. The rare, endangered, and usually elusive Black-necked Cranes are also found here.

Pangong Lake lies only partially in India. Over 60% of the lake lies in China-occupied Tibet. Situated at an altitude of about 13,943 ft. Tso Pangong also holds the honour of being one of the highest brackish water lakes in the world. On arrival you’ll check-in at the camp and spend the rest of the evening strolling around the lake, taking in the beautiful scenery.

The magic of Pangong Lake lies in its changing hues, as the sun hovers over it. After breakfast, take some parting shots with the lake. You will then head back to Leh via Chang-La pass 17,585 ft.

On your way back, you’ll first stop at Tso Ltak, an unexplored lake at 16,102 ft. situated on the foothills of Chang La. From here drive to Hemis Monastery which existed before the 11th century. It is one of the oldest and richest monasteries in all of Ladakh and is definitely a must-visit on your Adventure in Ladakh.

Later visit Thiksey Monastery. It is located at the top of the hill. It is very famous for its similarity with the Potala Palace of Lhasa. Take quick stop at the Druk Padma Karpo School. This is the school we saw in the movie ‘3 idiots’. Rancho’s School. From here, it’s a non-stop drive to your hotel in Leh, the rest of the evening is at your own leisure.

Optional: You can also pay a visit to the Tibetan Refugee Old Age Home near Leh. Unlike the Ladakhi people’s Old Age Home, this place receives a tiny fraction of visitors and donations.

Day Six: Among My Souvenirs

Leh: Day at own leisure (No Transport)

Take this day to explore the small lanes of Leh on foot, try bouldering, river rafting, paragliding or just go shopping at Leh Market. You can try some local Ladakhi food which has much in common with Tibetan food, the most prominent foods being Thukpa (noodle soup), and Tsampa, known in Ladakhi as Ngampe (roasted barley flour).

A dish that is strictly Ladakhi is Skyu, a heavy pasta dish with root vegetables. As in other parts of Central Asia, tea in Ladakh is traditionally made with strong green tea, butter, and salt. It is mixed in a large churn and known as Gurgur Cha, after the sounds it makes when mixed. Sweet Tea (cha ngarmo) is common now, made in the Indian style with milk and sugar. Most of the surplus barley that is produced is fermented into chang, an alcoholic beverage drunk especially on festive occasions.

In the morning, you’ll be dropped at the airport to bid Julley to this wonderful place.

Top 10 places to visit in Ladakh