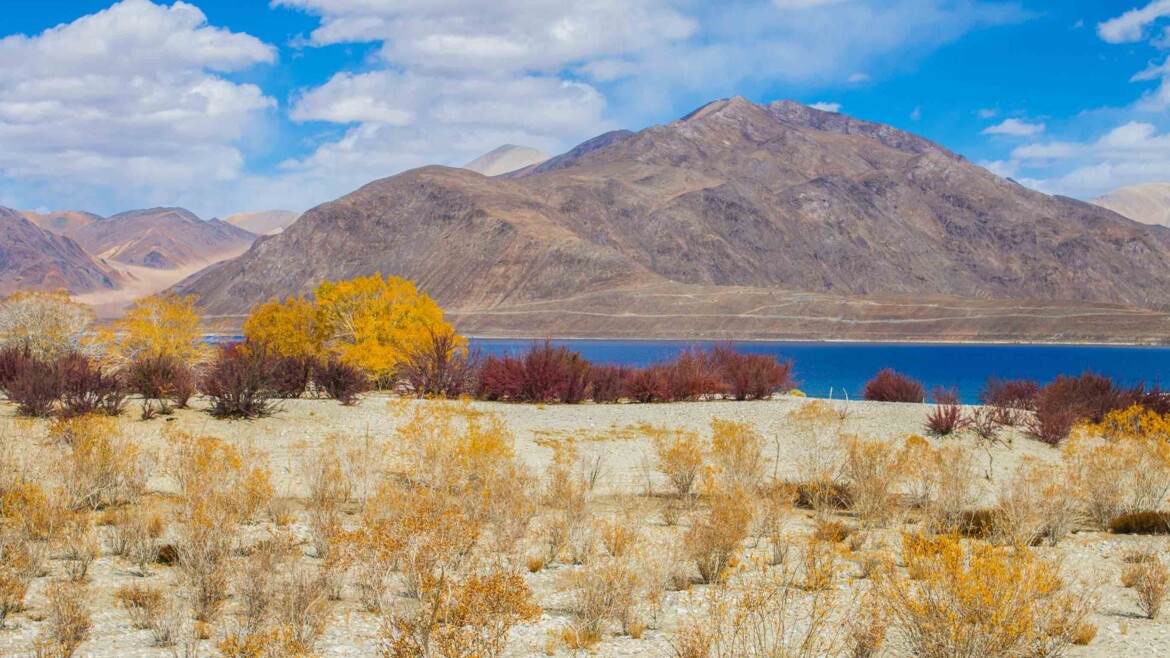 Day Two: What A View

Explore the gorgeous town of Leh and its beautiful stopovers. Most prominent among them is the Leh Palace. The ruins of this 350-year-old, 9 storey high Palace offer a breath-taking view of the city of Leh and its surroundings. Leh Market is starkly different to its metropolitan counterparts. The shops here are small, colourful, and vibrant. It has a rare mix of western and native cultures which is unique to itself.

Leh also boasts of a widely diverse population and shows its influences on its infrastructure. The Shanti Stupa, Jama Masjid, Zorawar Fort, Gurudwara Shri Pathar Sahib, and Magnetic Hill all lie within 25 km of Leh’s radius. Also, within this radius is the Indian Army’s Hall of Fame. It is a monument dedicated to the soldiers who served, and/or perished on the borders during wartime.

The Sangam (Confluence of rivers) between the ice-cold Zanskar and the mighty Indus is incredible to watch. It’s gushing blue waters put on a stunning display of power. Once you’ve absorbed in all these wonderful sights you will return to Leh and spend the night there.

After an early breakfast, you’ll check-out & drive to super scenic Nubra Valley 10,000 ft. The road takes you through the world’s 11th highest motor-able pass, Khardung La (17,582 ft.) a place engulfed in fog and wrapped by snow-laden peaks. You will literally be on cloud 9 that day.

Descending from the high pass, you will drive through the barren beauty of Nubra Valley, with the aquamarine waters of Shyok River for company. On arrival, you’ll first visit Diskit Monastery. It is over 250 years old and is the oldest monastery in Nubra Valley. Next to that lies an imposing 100 feet statue of Maitreya Buddha, in its resplendent golden avatar.

Later, you can spot double-humped camels, one of the rarest mammals, lounging on the desert at Hunder. At night, step out of your cosy room and gaze at the sky. Ladakh is one of the best places to stargaze, thanks to the pollution-free environment.

After breakfast you’ll check-out and visit Sumur, a picturesque village around 42 km’s from Hunder on the other side of the valley. The village of Sumur is famous and also an important stop since the holy monastery, Samstem Ling Gompa is located close to the village. The Samstem Ling Gompa other than its spiritual importance is also known for its frescos and gorgeous silk Thangkas. The sand dunes at Sumur is also unoccupied compared to its counterpart in Hunder.

Later in the day take a short drive to Ladakh’s best-kept secret, Yarab Tso Lake. The lake is a sacred place for the local people and can only be approached by a short hike.

From here either drive down to Sumur for the night or drive to the hot sulphur springs at the village of Panamik which is the last destination for tourists travelling across Ladakh. Panamik is also the village that is nestled very close to the Siachen Glacier, the highest battlefield in the world.

After an early breakfast, you’ll check-out and drive towards Pangong Lake 13,943 ft. via the Chang-La 17,585 ft. Chang-La is the 10th highest motor-able pass in the world. On the way your first stop will be Shey Palace, the palace, mostly in ruins now was built first in 1655. The Palace and adjoining monastery are situated on a hilltop and the Palace offers a breath-taking view of the valley below as well as of the Mountain range across the valley, where the colours of the mountains change with the altitude.

Later visit Thiksey Monastery. It is located in the Indus Valley. Thiksey Monastery is home to a beautifully sculpted sculpture of Maitreya (Future Buddha) as well as murals depicting the life of future Buddhas. From here you’ll continue on to Tso Pangong. Upon arrival you’ll check-in at the hotel/camp and spend the rest of the evening strolling around the lake, taking in the beautiful scenery.

The magic of Pangong Lake lies in its changing hues, as the sun hovers over it. It is probably the bluest and the most crystal-clear lake you would have seen so far. It is home to many migratory birds, from ducks and geese to the rare and elusive Black-necked Crane. What will surprise you is that the lake lies only partially in India, its major chunk lying in China.

After breakfast, take some parting shots with the lake. You will then head back to Leh via Chang-La pass 17,585 ft. On your way back, you’ll first stop at Tso Ltak, an unexplored lake at 16,102 ft. situated on the foothills of Chang La. From here drive to Hemis Monastery which existed before the 11th century. It is one of the oldest and richest monasteries in all of Ladakh and is definitely a must-visit on your Adventour in Ladakh.

Later stop at the Druk Padma Karpo School. This is the school we saw in the movie ‘3 idiots’. Rancho’s School. You’ll visit Rancho’s Café, a café just outside the school campus. You can have some crunchy snacks and coffee while enjoying the memorabilia from the movie that is kept in the café. From here, it’s a non-stop drive to your hotel in Leh, the rest of the evening is at your own leisure.

In the morning, you’ll be dropped at the airport to bid Julley to this wonderful place.